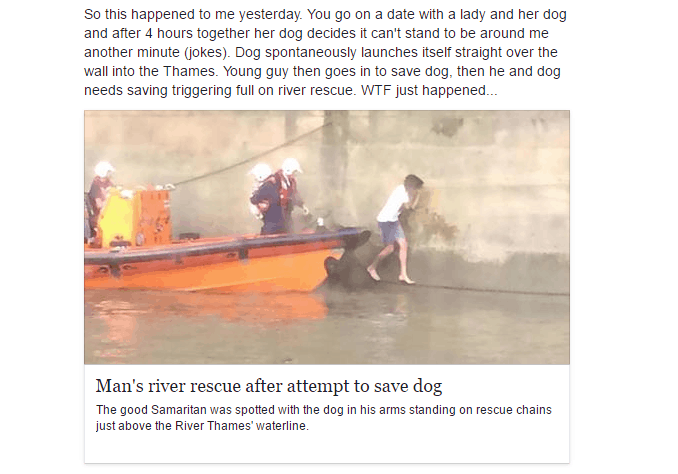 Let me set the backdrop for you; I’m actively dating and on the whole, all my first date experiences have been positive. No ladies with dodgy profiles or fake images, no no-shows, all normal and non-eventful really. That said, for all the dating normality that has been, my last date was beyond normal and will live forever in the minds of all involved.

As first dates go, it was going well

It was Sunday 11th of June and I had arranged to meet a lovely looking lady in London. We connected on the dating app Bumble and had decided to go on our first date in London. She asked if it was okay to bring her dog along. Initially, I thought it may be a case of three’s a crowd but let’s give it a go. I love dogs and the weather was due to be hot, so no big deal. Right now have to convince her as well as the dog as to how much of a great guy I am.

Big Day arrives and all three of us meet under the Shard at London Bridge station. First impressions of Miss Bumble (names have been changed to protect the traumatised) are good. First impression of Watson the dog are cute but incredibly bouncy. Initial formalities and light chat transpire and we eventually make our way down to London Southbank to find a place to relax.

Long story short. Miss Bumble is very easy to talk too and the date carries on for the next 7 hours. Relaxing in deckchairs, listening to live bands, drinks and food in numerous bars and restaurants all made for what was a relaxing Sunday afternoon in the sunshine. Even Watson seemed to be enjoying himself. 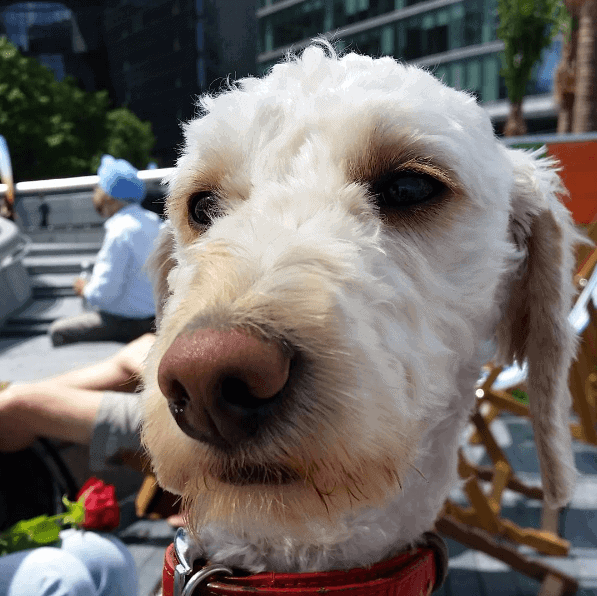 Oh my days, how quickly things can change. (Down with the kids)

It was around 7.00pm and we decided to wrap it up. One last walk along the river to Vauxhall Station then on our separate ways. It was a lovely evening with lots of people out walking, running and riding bikes.

As we walk along, we are overtaken by this young guy and his dog. The dogs meet, shake their bums, walk like crabs and socialise. Miss Bumble says, “I might let him off as he has been on the lead all day”. She does so and Watson runs off. The young guy (who I now know as Vaughan) lets go of his lead and the two pooches run off.

Now I don’t know if it was a case of Watson thinking, damn I have been listening to this guy go on all day and I can’t stand another minute of it or it was simply extreme excitement to be off the lead or just brain failure, either way he does a right turn and just jumps clear over the river wall.

Let’s be clear, this was a high wall, he is a small dog and he cleared it completely. It was as graceful to watch, a leap that was as big as the day the cow jumped over the moon. One big arc straight over the wall and then gone, just like that.

It was at this stage all three of us had a reality check and tried to process what the hell just happened. That is putting it politely.

We ran over to the wall and sure enough, 5m below us was Watson in a fast flowing River Thames.

From that point on it was what to do. We tried to signal passing boats as to the emergency but in hindsight, there was not a lot they could have done because of the limitations of getting a big boat into that part of the Thames.

Vaughan and I tried multiple emergency life buoy stations, they were all empty. 3rd station Vaughan retrieved one but really is a dog going to understand to swim and even climb on to a life buoy. But we had to try something.

The longer it went on, the more helpless we felt. Miss Bumble was on the phone to the emergency services and was clearly distressed. Other bystanders were distressed and screaming for help. It was bloody chaos but all of us could do nothing. Watson was swimming against a strong current and was getting tired, really the only option was to go in.

Let’s be clear, that was not an issue for me. I competed in an English Channel swim 2 years ago and was well aware of what to expect with cold water at this time of the year. However, the River Thames is a beast all of its own making. The tide was turning, there were rip currents in all sorts of directions and not knowing what was under the water was the real danger. Not only that I was very aware of the countless stories of owners going in to save dogs and then getting into trouble themselves.

It was at this point Vaughan stepped up and said: “I’m going in”. The blind enthusiasm and disregard for self-preservation, praise the youth. It turned out it was more a case of he couldn’t watch a dog die and had to do something.

He was hanging off stonework, rings and mooring chains with the greatest of ease, much like a rock climber. What was his and Watson’s saving grace was the fact there were mooring chains slung along the wall that we couldn’t see from above. Vaughan was able to support himself on the chains, reach down, scoop Watson out of the water, then just hang on.

Not much longer we heard the sirens of the water police. We couldn’t see them but that sound was a massive sense that help was on its way. Eventually, we spotted them as well as a RNLI boat, the water cavalry had arrived. Just hang on Vaughan we shouted.

They pulled up ever so delicately and extracted Watson and Vaughan from the river wall and to safety, as can been seen below.

Watch: @TowerRNLI assist a dog that jumped into the Thames and a passer by that tried to help rescue it. pic.twitter.com/epNTDKH0d3

We were all reunited, hugs all round. Watson was a shivering mess, cold and shocked I expect. Miss Bumble was clearly upset but massively relieved. Good Samaritan Vaughan took all the praise like it was no big deal. It turned out he had lost his dog only a month earlier and was driven by pure emotion to not let it happen to someone else. What a legend.

My friends have since pointed out how I went straight past the hero to thank the RNLI. Look, I was extremely grateful for what Vaughan had done, but in my mind, I was more grateful to the RNLI because they had saved them both. Should they have not turned up in time, things may have ended rather differently.

Once official formalities were over with the police and the RNLI we exchanged details with Vaughan and went on our merry way. For Miss Bumble and I, it wasn’t so merry, rather subdued really. I sent Miss Bumble and Watson home to rest up and take stock.

The Day After. What Is Going On? 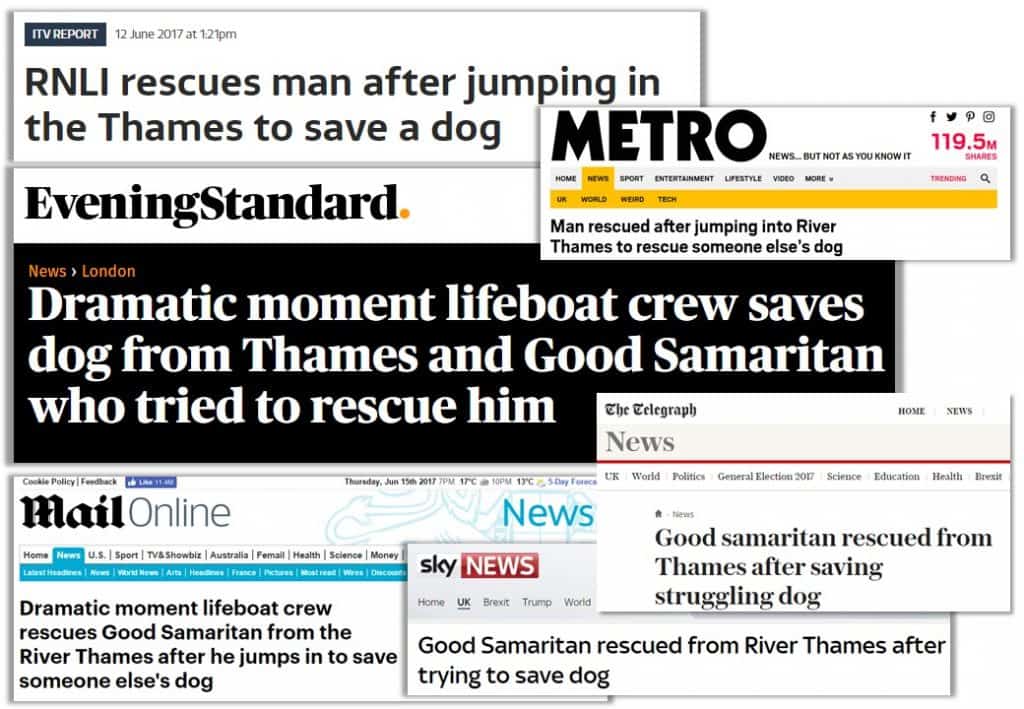 I checked in with Miss Bumble to see how they were both doing. All was well with them. What was a little off was the media frenzy that followed. News, social media and phone calls from journalists as to what happened. Really, I had no idea it was that newsworthy.

Even RNLI original footage was getting remixed and distributed. This from the BBC.

I particularly love this shot of Mr Watson reading the account of his own rescue. Ahhh, how cute…   (bloody dog) 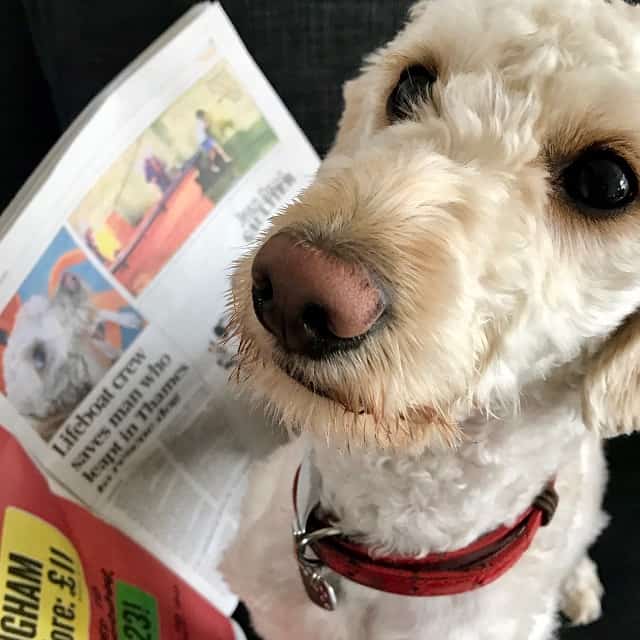 What is even funnier is how fast news travels. It even got picked up in my hometown of Cairns, Australia by Star 102.7 morning radio. And in the true Aussie spirit of banter and laughs apparently there were crocodiles in the Thames and Miss Bumble and Watson went home with the hero Vaughan whilst i was left high and dry. WHAT???

Baz, never let the facts get in the way of a good story. 🙂

So What About The Future? Another Date?

So will there be another date I hear you ask? That is between Miss Bumble and I. Personally I’m up for it but whatever happens, I can tell you now, THE DOG IS NOT INVITED.

On a Serious Note

It is only once everything has settled down do you reflect on the events that passed. We are very fortunate to have men, women and animals that serve on the front line of our services to protect the public. It is only after you call on them do you truly understand the service they perform.

In our case,  a massive thank you goes out to the RNLI and the water police.

Watson has since started a just giving page for the RNLI to raise funds in support of his appreciation. I have since found out the RNLI is principally funded by legacies and donations with most lifeboat crew members being unpaid volunteers. On that basis alone, I contributed.

If you have found delight and amusement in my unfortunate series of events, I’m pleased. All involved can now laugh about it too. If you would be prepared to reward that comedy please donate to the Just Giving page below to show your appreciation of the RNLI services.

Would it change your mind if i was to conjure up a first date curse on you should you not? You have been warned. 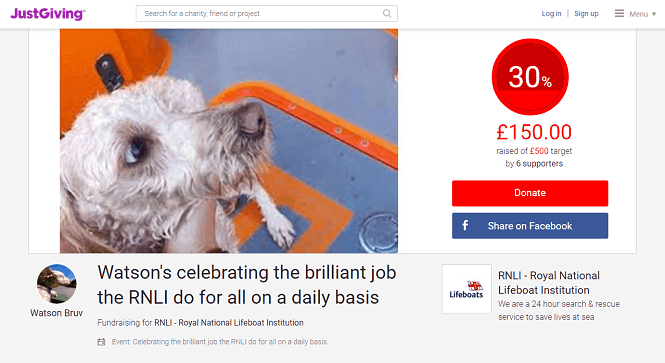 Closing thought: Be careful out there people. Dating is a battlefield.

Author Bio: Daryl Cygler is a digital marketing consultant, digital nomad and dating donut looking to explore life and opportunities in far off places with family and friends.