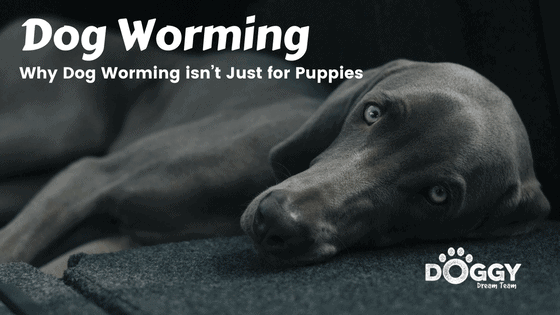 How often should I worm my adult dog?

Maybe he’s an indoor dog that doesn’t scavenge – so why should you bother? Regardless, the fact is, dog worming isn’t just for pups and for the health of your dog (and other people) he needs worming at least three or four times a year.

Dog Worming so often. Why is this?

There are two main reasons:

Which Worms do Dogs Get?

The dog worm most people have heard of is the roundworm, Toxocara. This is the worm with the potential to cause blindness in children, because of ‘visceral larval migrans’ (VLM) [1]

VLM occurs when children who have been playing on ground contaminated with infected dog poop, put their hands in their mouth, and swallow Toxocara larvae. These larvae migrate in the child’s body, and if the larvae travel to the eye they can cause blindness. Indeed, it’s because of this public health risk that the law requires owners to pick up their pet’s poop. [1]

You conscientiously wormed your dog as a puppy. What does this mean for him as an adult?

a) Deworming is optional as all the worms died when he was a pup
b) To be on the safe side deworm once a year.
c) It’s still necessary to worm at least once a quarter

The correct answer is (C). This is because those encysted roundworm larvae continue to hatch out over the pet’s lifetime (PLUS deworming isn’t just about roundworms.)

Roundworm larvae cross the placenta to infect the pups in the womb, and when the pup suckles his mother’s milk, he is infected with yet more. These larvae hatch out rapidly in the first six months of life, hence the importance of worming puppies. But what many people don’t realize is those larvae continue to hatch out (albeit more slowly) over that dog’s life time.

So Much More than Roundworms… 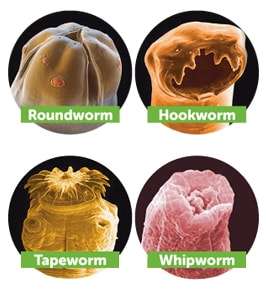 Aside from the public health implications, worm burdens can make your dog sick. From the pot-bellied unthrifty puppy with a stomach full of roundworms, to the dog that coughs up blood and dies suddenly from lungworm, internal parasites can have severe implications for your dog’s health. And when you consider worms can range in size from just 5mm to a frightening 5 metres, it is worth making the effort to prevent any infection in the first instance.

Signs of Worms in Dogs

Often a dog with just a few worms doesn’t give you any clues. Once the worm numbers climb he may start to show vague and non-specific symptoms such as:

Current advice is to give your dog a broad spectrum worming treatment every three to four months. However, this is a starting point not an end, and some dogs need to be wormed more regularly. This is because they are at greater risk of contracting worms.

Either you or your vet can conduct a risk assessment, to see if your dog needs more frequent worming. Factors that indicate an increased risk include:

If you answered “Yes” to any of the above, then speak to your vet about the ideal protocol for your pet.

Are Dog Worms Contagious to People?

People are a dead-end host for roundworms, but larval migration can cause blindness.

What Worms do Dogs get from Fleas?

This is tapeworms, so if any pet in the house has fleas, then all should be dewormed.

The dog that vomits up spaghetti has roundworms.

The dog with rice grains round his rear has tapeworms

Best worming tablets for dogs. Know all Wormers are NOT the Same!

And finally, there’s some good and some bad news.

The good news is you may be worming your dog more often than you think.

The bad news is it may not be a broad spectrum wormer.

Also, know that not all worming tablets or wormers are effective against all types of worms. The most common non-prescription wormers only work against roundworms. Even excellent products such as Panacur (fenbendazole) only combat roundworms. To be sure you’ve got those tapeworms you need a broad spectrum product such as Drontal or Milbemax.

In short, read the packaging carefully (or discuss with your vet) to see what your dog is covered against. Worming is important but it’s also more complex than first meets the eye, so speak to your vet about what’s best for your dog.