Why Does Chocolate Kill Dogs? How to Prevent Poisoning 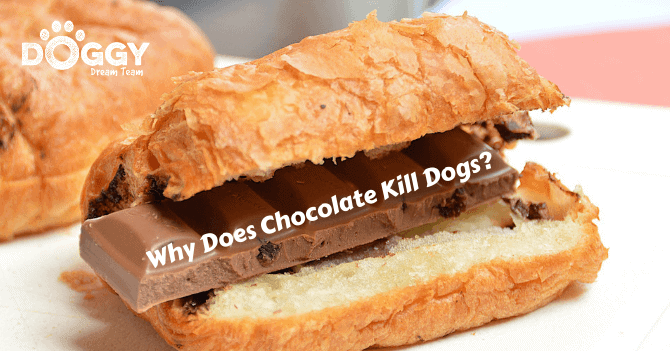 Can dogs die from chocolate poisoning?

Chocolate toxicity occurs because pet parents lower their guard. Pet owners never set out to poison their pet…and yet it happens all too easily.

As an example, take the following real-life situation:

Mrs W had just been discharged from hospital after a serious illness. A steady stream of well-wishers called, bearing gifts and good cheer. One visitor brought a special treat of a box of handmade chocolates in an ornate carton tied with a ribbon, lovingly presented in an expensive gift bag.
Mrs W was grateful for the thought, and her husband dutifully set the present aside whilst she talked to her visitor. Unfortunately, Bonzo, the family dog spotted the package and investigated. Chewing through the packaging he quickly ate half the high-cocoa content goodies before anyone noticed he was missing…

Don’t let this be you.

But if the worse did happen, knowing what to do could save your dog’s life.

Why Does Chocolate Kill Dogs?

Chocolate makes us feel good, and there’s a reason for that…it contains various chemical substances that affect the body and mind.

But people are different from dogs. Foods that are safe for humans can be toxic to dogs, of which chocolate is a prime example.

Specifically, chocolate contains caffeine and theobromine. Both are stimulants from a family of substances that dogs are particularly sensitive to. Whereas we might feel energised and revived by a couple of squares of the dark stuff, the story for a dog is very different.

Theobromine prolongs the time a nerve sends out messages telling muscles to contract. It also amplifies how those muscles respond. This adds up to skeletal muscles and the heart muscle contracting harder and more frequently. It’s as though the dog is running a marathon, right there in your living room.

Take this to an extreme, just as runners collapse from over-exerting themselves, so a dog can collapse from chocolate toxicity. In the worst cases, the dog either have seizures or a heart attack and die

Some dogs are more at risk than others.

Whereas one dog may scoff down a whole chocolate bar with no lasting effect, for another dog of the same size, a few squares can result in toxic levels of methylxanthines and other stimulants.

This is down to a lack of a hormone that metabolizes chocolate. Less of this hormone and the effects are worse and stick around for far longer. (If you want to get technical, this is known as CYP1A2 1117C>T polymorphism.)

Also, because theobromine is a stimulant that pushes the heart hard, dogs with pre-existing heart disease are in greater peril. The strain on their circulation of a ‘chocolate high’ may be too much and cause a fatal heart attack.

The dog’s size also has an impact. A few grams of dark chocolate for a Great Dane may not be a problem, but it could be deadly to a Chihuahua.

The Signs of Chocolate Poisoning

Chocolate is rich stuff, so even if the dog avoids dramatic symptoms, expect sickness and diarrhoea as an after effect.

Your vet has access to a ‘chocolate toxicity calculator’, which helps them factor in the dogs weight against the type and amount of chocolate eaten. This helps them work out what is a large amount likely to result in theobromine poisoning, or if the amount of theobromine is not especially concerning.

That is, except for those dogs with CYP1A2 1117C>T polymorphism who are high risk from even a small amount of chocolate.)

Clinical signs of chocolate toxicity in dogs include:

But if you find Fido beside an empty chocolate box don’t wait for symptoms to develop. Act immediately.

What to Do If a Dog Eats Chocolate

Time is of the essence. The best option is to seek veterinary attention and make the dog vomit. But this has to be quick. Any longer than two hours after the event and the chocolate is past the point of no return in the small intestine.

Here’s what to do:

Symptoms of chocolate poisoning often start 2 – 4 hours after the event. The theobromine can also stick around in the body and be re-processed through the liver, so you’re not out of the woods for around 24 hours.

The vet may prescribe activated charcoal to give by mouth every four hours. This helps absorb any theobromine lingering in the gut to reduce the amount in the bloodstream.

Prevention is Better than Cure

It’s not unheard of for a dog to climb on a chair to reach a table to get at goodies…so don’t take any risks. The only safe chocolate is that stored in a cupboard out of the dog’s reach.

Be security minded with regards to chocolate and keep it somewhere safe…like your stomach.

What became of Bonzo and his luxury chocolate binge extravaganza?

Bonzo ate nearly 150 grams of chocolates (enough to cause serious toxicity in such a small dog). But fortunately, the luxury product was mainly a filling full of sugar, cream, and butter, which were only coated in plain chocolate. Thus, the actual quantity of dark stuff was much lower.

In reality, the actual amount of chocolate consumed was low and he coped fine. Bonzo went home with a bottle of activated charcoal and an owner aware of the narrow escape they’d had.

A happy ending for Bonzo. But better still…don’t go there. Keep dogs and all types of chocolate apart.