Pale Gum’s in Dogs! Get your Teeth into these 5 Gum-related Problems 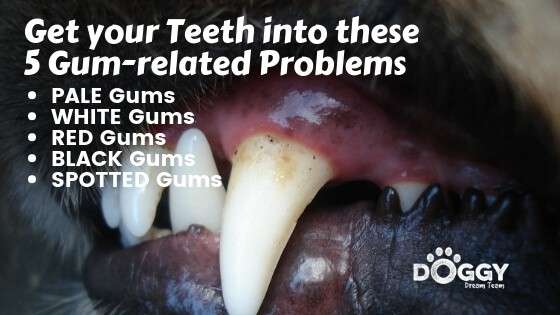 Why are my dogs gums pale?

The state of a dog’s gums says a lot about their health.
Healthy dog gums are a great sign your fur-friend is fit and well. But what do pale gums in dogs, or red, bleeding gums or a fleshy-growth mean?

Let’s sink our teeth into the topic of what a dog’s gums tells us about their overall health, what to look for, and what it all means.

Before you can spot a problem, know what the normal colour of the gums looks like.

Take the example of a power socket. You know electrics shouldn’t spark, smell of burning, or have smoke billowing out. If one of these things happens, instantly you know there’s a problem.

The same with a dog’s gums. As a rule, healthy dog gums should be a healthy pink colour:

“My dog’s gums are pale. What does it mean?”

First, it’s important to know that pale gums in dogs are not normal and your fur-friend needs an urgent vet checkup.

The reason why the gums are pale can be due to anaemia in dogs (a lack of red blood cells), poor circulation (such as a shock reaction), pain or even anxiety.

The causes of anaemia are a huge topic because there are lots of reasons for anaemia in dogs. Just a few examples include:

From this, you see how important a vet checkup is, so the cause anaemia is identified and treated.

Also, pale gums are just about anemia. For example, poor circulation, fear or stress can cause the gum colour to become pale

Apart from pale gums, other signs of anaemia include extreme tiredness and lack of energy. This is a healthy blood count is necessary to provide the oxygen to power the muscles. A lack of oxygen means the muscles and organs are deprived of energy and so the dog becomes desperately tired all the time. Indeed, another sign of anaemia is a poor appetite, which can in part be due to the underlying cause driving the problem.

Get straight to the vet. Even an albino animal that lacks pigment in the skin, should have pink gums.

This requires immediate action so contact the vet as a matter of urgency.

As a rule of thumb, redness in dogs means inflammation is present.

The latter is a sign of periodontal disease in dogs and gingivitis. This may well be accompanied by a bad smell.

Another sign to look for is bleeding along the gum margin. This is a sign the gum is severely inflamed, which causes bleeding when touched or the dog bites down on a biscuit.

Left untreated periodontal disease leads to gum recession, tooth root abscesses, and teeth falling out. However, that angry red line is an early warning sign that action is needed. Don’t ignore that call to action since improving oral hygiene with regular brushing and dental chews helps protect those pearly whites.

But a quick few words of caution.

If the gums are brick red overall and all the gum tissue is this colour, see a vet immediately. Brick red gums are a sign of septicaemia, which can be life-threatening. Don’t delay. Call the vet no matter what time of day or night.

Whilst the majority of gums are bubble-gum pink, some dogs do have a blotchy pigment patterns to the gums. These patches may be brown or a dark colour, and perfectly normal for that individual. Indeed, bear in mind that some breeds, such as the Chow Chow, have black gums as de rigeur.

Just check that the darker areas are not raised above the pink ones, bleeding, or look angry in any way. Some of the nastier oral tumours are darkly pigmented, so if in doubt, see a vet (See Below.)

Perhaps your dog has a lump in their mouth. Should it be there?

Don’t panic, and instead check the other side. The left and right hand sides of the mouth should be mirror images of each other. If the bump is present on both sides, then it may well be normal anatomy (but if in doubt draw it to your vet’s attention.)

Certain breeds such as Boxers, are prone to fleshy growths on their gums. These can sometimes grow so big as to swallow up the teeth. Whilst these are often just additional fibrous gum tissue, and nothing to worry about, get the vet to take a look. Occasionally a more serious but atypically unpigmented tumour can masquerade as one of these harmless epulides.

The one to worry about are dark lumps on the gums, especially if they are coal black. This can be a sign of a malignant melanoma (a type of skin cancer) and needs urgent attention.

Now you know what healthy dog gums look like, get into the habit of lifting their lip and looking.

“Why are my dog’s gums pale?” Now you know the answer and are empowered to do something about it.