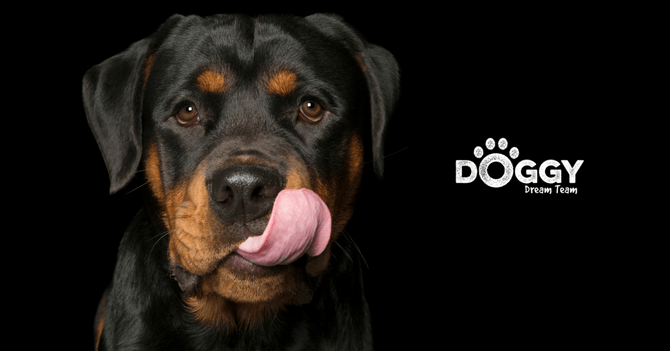 The Rottweiler polarizes opinion more than any other dog. Some people shrink away and never see past the growling, snarling image of this broad-chested, muscular dog. Whilst others know them as devoted family companions who you would trust to lay down their own life to protect your kids. So which impression is correct?

A Man Made Dilemma

In truth, the gulf between these two diverse images is largely man-made. When raised well, properly socialized, and handled with firm respect using reward-based methods, the Rottweiler is a first class canine companion.

Conversely, rear Rottweiler pups in isolation, neglect giving them early opportunities to get used to the world, and then treat the harshly...or give them weak guidance...and the Rottweiler's sheer muscular power makes them a danger to life and limb.

Therefore the ideal Rottweiler owner is experienced with dogs (a Rottie plus a first time dog owner is a bad combination!), who carefully chooses a pup from a responsible breeder, who commits to socialising the dog from an early age, and uses reward-based training methods. Down this path lies a beautiful relationship with a much misunderstood breed.

Why Rottweiler Health Insurance is Important

Another responsibility is the cost of upkeep for a giant breed like a Rottweiler. As well as factoring in expenses such as food, you also need to be mindful that vet bills will be proportionately larger.

Even simple health complaints can work out costly due to the sheer quantity of antibiotic a Rottweiler requires. Whereas a 10 day course of antibiotics is inexpensive for a Yorkie, it can be eye-watering for a large Rottie.

Find out about Rottweiler health problems

To appreciate the true scale of the possible costs of keeping a Rottie, read on to learn about common health problems with a tendency to rear their ugly head in the breed.

Hear what we’re saying about why a pet insurance policy is a sound decision?

We will now explore these medical issues in more detail so as you know what to look out for in your Rottweiler’s pet insurance policy.

What’s the difference between a Rottweiler and a Yorkshire terrier with bad hips?

Practicality. Whereas you can pick a Yorkie up and carry them home, a collapsed Rottweiler is too heavy to lift.

Owning a large breed dog with mobility issues is distressing, not only because they are in pain but because on a practical level it’s hard to cope. Sadly, the potentially disabling condition, hip dysplasia, is often inherited by a pup from their parents. Thus, it’s not only older dogs that can suffer from joint pain, but relative youngsters.

Mild hip dysplasia is often managed with pain relieving medications and nutraceuticals. The former keep the dog comfortable whilst the latter aims to slow deterioration. But when things get too bad, then surgery may be the best bet to get your dog back on his paws.

Hip replacment surgery is almost common place at referral centers, but it does come with a big price tag attached. When costs threaten to run out of control, having health insurance in place makes all the difference.

The Rottweiler dog can be big hearted in more ways than one!

The Rottie is prone to a condition which causes bagginess of the heart muscle, leading to a large, dilated heart. This means the heart lacks the strength to circulate blood round that large frame and the dogs suffers from fatigue. Other signs can include fainting, a cough, or sometimes even a swollen belly.

Ultrasound scans of the heart can provide a real-time image of how well it’s pumping. But this isn’t just of academic interest because there are drugs which can improve the heart’s ability to pump…but you guessed it…the medication is expensive, especially the large size tablets a Rottweiler needs.

Would it surprise you to learn it’s not just human teenagers that suffer from acne? Dogs do too.

Canine acne can range from mild to potentially disfiguring, with good treatment reducing the risk of unsightly scar tissue forming. To complicate matters, your vet may need to run tests (such as skin scrapes or biopsies) to rule out other conditions which cause spots to form (such as demodectic mange).

For mild cases, inexpensive anti-bacterial washes may be all that’s needed. Severe cases need high doses of antibiotics, sometimes for weeks at a time. With higher strength antibiotic tablet costing at least £2 per tablet, and dogs potentially needing four tablets per day, it’s easy to see how pet insurance comes into its own.

Not for nothing does Addison’s disease also go by the name:  “The great Pretender.” This is because the symptoms of this disease can mimic a whole host of other problems including stomach upsets, muscular sprains, and even kidney failure.

In reality, Addison’s disease is caused by a lack of natural steroid. The latter is vital to help the body cope with stressful situations, as it prepares the dog physiologically for fight or flight. Without the buffer of steroids to meet the demands of the sudden needs for energy, the body simply can’t rouse itself to cope.

Addison’s disease affects young dogs and get progressively worse. In the early stages the symptoms can be mild and mistaken for intermittent stomach upsets. But Addison’s worsens over time and can reach a stage where the dog collapses out of the blue, and unless given urgent life-saving treatment, can sadly not survive.

Given the vague symptoms, it can be quite a long diagnostic road until the underlying cause (ie Addison’s disease) of niggly problems (ie repeated stomach upsets) is identified. This often means spending money on screening blood tests, faecal analysis, and targeted tests before the answer is found.

Addison’s used to be treated with tablets given at home. Unfortunately, that manufacturer of that particular (human) drug recently increased the cost by 70 (Yes, 70) meaning this option is no longer tenable. Instead, a veterinary product in the form of an injection is available. This needs to be given monthly for the rest of the dog’s life, at a cost of roughly £60 per month. Hence, the advantage of having taken out pet insurance which covers a condition for life. [To understand the different types of cover hop over to: A No NonSense Guide to Finding the Best Pet Insurance for Dogs.)

Parvovirus is a virus that causes bloody diarrhoea. Ah ha! You may be thinking, My Rottie is vaccinated, so I don’t have to worry. Whilst this is the case, it’s also true there’s something about the Rottweiler which makes them especially vulnerable to parvovirus infection.

It’s essential to get your pup vaccinated at an early age and follow hygiene precautions until they are able to go outside. However, even then there is the odd dog that is vaccinated which succumbs to parvovirus. The dog may need intensive supportive treatment such as intravenous fluids, in order to prevent dehydration, and having provision in place to meet hospitalization fees is definitely something that helps you sleep easy at night.

Rottweilers, along with football players, have a tendency to snap an important ligament which stabilizes the knee joint. When the cruciate ligament breaks, the thigh and shin bones can travel backward and forwards against each other which causes pain and marked lameness.

If the problem isn’t corrected, bone rubbing against bone causes early arthritis. This means it’s important for your Rottie’s long-term health to get a surgical fix sooner rather than later. Big, heavy dogs like the Rottweiler do best with some of the more advanced surgical techniques. However, this often requires referral to specialist surgeons, which is costly.

It is a sad fact that bone cancer occurs more commonly in giant breeds than any other size. We aren’t really sure why, but it might be something to do with prolonged periods of growth to reach that big size.

Bone cancer is extremely serious and needs urgent treatment, preferably radiotherapy if the leg is to be saved. This specialist treatment is especially costly and so it can be doubly distressing to know there is an effective treatment option but it’s not affordable.

Your Rottie needs your help! Just as the Rottweiler will protect you through thick and thin, so they rely on you. Put provision in place to cope should they become ill, by taking out pet insurance.