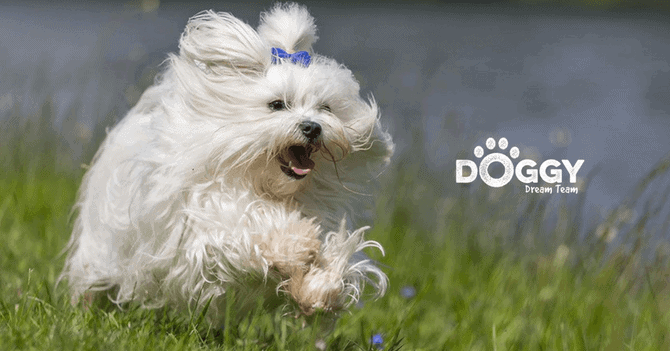 Pet insurance for Maltese terriers makes the cost of modern medicine accessible for this ancient breed.

Why are Maltese terriers white?

The ancient Romans fell in love with this little dog from Malta and believed white to be a sacred colour. That was around 4,000 years ago, and successive generations of selective breeding perfected that snow-white coat we see today.

With a breed as old as the Maltese, surely most of their health kinks have been ironed out. After all, the breed wouldn’t have survived for some many millenia if they were weaklings. Indeed, this dog may be small but he’s happily robust, with the exception of a few notable health problems.

But even little dogs can get themselves into scrapes, such as the Maltese that swallows a peach stone and needs emergency surgery to remove the gut obstruction. And small size often means delicate, which means more expensive to repair…should they break a bone.

Let’s take a closer look at the health of these dogs and consider why pet insurance for Maltese Terriers is a good idea.

To help you make an informed decision about whether pet insurance for Maltese dogs is in your fur-friend’s best interests, here are more details about these conditions.

Sometimes the clue’s in the name. But if we were to fine tune the description, it would be: Small White Dog Shaker Syndrome!

This condition affects small dogs, most often those that are white, such as the West Highland white terrier; although it’s now thought Miniature Pinschers can be affected.

Shaker syndrome can occur at any age, including youngsters around 1 – 2 years of age. It comes on almost overnight and causes uncontrollable tremors. At first the unsuspecting owner may thing the dog is cold or anxious, but the shakes refuse to shift even when the dog is warmed and reassured.

It’s thought the cause of white dog shaker syndrome is the immune system turning on itself and attacking cells that produce a certain type of neurotransmitter.

Reaching a diagnosis is expensive because the shaking is only a symptom. There are lots of other conditions which can cause shaking, such as encephalitis, and these need to be ruled out. Tests to do this include blood tests, sampling the cerebrospinal fluid, and an MRI scan, all of which adds up to ££££.

Ironically, the treatment is inexpensive as it consists of steroid tablets. However, if these diagnosis is incorrect steroids can make the dog worse, hence the importance of finding out exactly what the problem is.

This is a good example of how modern diagnostics can make a material difference to an old breed such as the Maltese.

Have you ever noticed how some dogs skip a step with a back leg? Once you tune into this, you’ll realize it’s surprisingly common and see lots of dogs doing it.

One of the common causes of this skipping gait is an instability of the kneecap. This is down to the patella (kneecap) having too much freedom to move sideways. When it pops out of position, the displaced patella physically locks the leg in the wrong position and the dog skips a beat until it shakes back into place.

Luxating patellas are very common in many small, toy, and teacup breeds. If the dog is lucky, the problem happens infrequently and this occasional soreness can be settled with a dose or two of pain relief.

Unfortunately, other dogs are not so lucky and the friction of that kneecap popping out of place causes a lot of inflammation. The latter causes pain, which makes the dog limp. And over time, the inflammation leads to early onset arthritis and a thickened, stiff knee that’s painful to bend.

These sore knees are best operated on to align the thigh and shin bone, and help the patella sit more snuggly in place. There are several different procedures which are appropriate, depending on the shape of the dog’s leg.

The simplest remedial surgery can be done in first opinion practice. However, more complex operations that involve breaking and resetting part of the leg, are best done by vet specialists in orthopaedics.

Don’t let the small size of the Maltese terrier lull you into a false sense of security. A specialist charges the same for a consultation (typically £180 – 300 per visit) regardless of the patient’s size. This makes pet insurance for Maltese terriers invaluable, should a complex operation be needed.

PRA is a condition affecting the light-sensitive layer of the eye (the retina) leading to a slow onset blindness.

The first hint of trouble is often the dog being less confident at night. In dim light, they may struggle to make out steps or pathways and be reluctant to walk. As their eyesight deteriorates, tell-tale signs include unusual clumsiness and bumping into objects placed in their path.

PRA is an inherited condition, passed from parent to pup. It is especially distressing because it can affect young adult dogs with the rest of their lives ahead of them.

Although there is no treatment, an accurate diagnosis is desirable. This helps to rule out other causes of poor eyesight, where there are treatment avenues to explore.

A veterinary ophthalmologist is best placed to conduct the necessary tests. A first opinion veet will refer patients to see this specialist, and having pet insurance for Maltese terriers in place means you don’t have to worry about the cost.

The windpipe (trachea) is the tube through which air passses down into the lungs. The windpipe is flexible but with a fixed diameter, much like a hosepipe. With a collapsing trachea, the pipe stretches and loses some of its strength. This means when the dog breathes in, suction flattens the windpipe causing it to collapse in on itself.

Symptoms of a collapsing trachea include noisy breathing, often accompanied by a strange honking sound. But this problem can be serious as it makes it difficult to breathe. The vet will need to run tests and x-ray the dog’s chest, in order to rule out other problem that cause a similar sound and confirm the diagnosis.

Treatment involves placing a special stent into the windpipe to give it support. This often requires referral to a specialist if the collapsing part sits within the chest itself.

For owners that don’t know what it is, reverse sneezing can look alarming. The dog makes strange snorting noises, almost as if something is stuck up the nose. They may breathe in an exaggerated way, sometimes sucking in their cheeks or throat in the process.

Frightening as this may appear, it’s actually nothing to worry about. Reverse sneezing is caused by a tickle or irritation at the back of the throat and usually stops of its own accord after a minute or two.

You can help the episode to pass more quickly by gently stroking the dog’s throat or offering a treat to eat so that they swallow.

Sometimes, reverse sneezing is caused if the soft palate is a little overlong for the mouth. The extra flesh gets sucked into the windpipe if the dog takes a sharp intake of breath. Again, this is nothing to worry about, but if the dog has regular episodes it can cause the back of the throat to become inflamed.

Occasionally surgery is required to trim back the soft palate to a more normal length. The vet assess each dog as an individual and can advise whether this would be helpful or not.

Last but not least, small as Maltese terriers are they still get up to mischief like any dog. From broken bones to eating things they shouldn’t, stuff happens.

Pet insurance for Maltese terriers is your best protection against outsized bills for a small dog. Act today so that your Maltese has full access to modern medicine, without fear of the costs involved.