How to House Train a Puppy: Avoid these 7 Common Mistakes 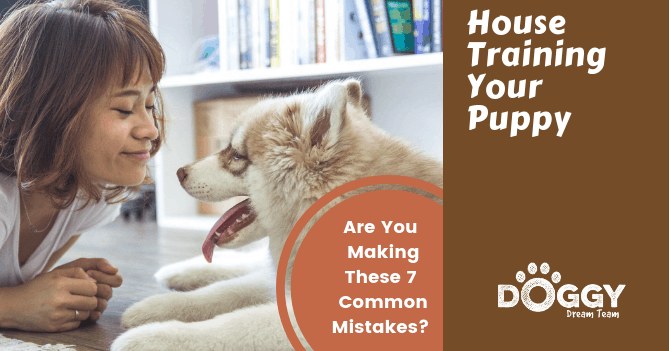 At long last your new puppy is home!

There’s nothing quite like that buzz of excitement, love, and anticipation that accompanies the patter of tiny paws and bringing home a new fur-family member.

But wait…then comes the slow dawning realization that puppies poop and pee…and aren’t fussy about where!

How to house train a puppy quickly becomes an important question to address. The problem is that ‘little wee-wee messages’ left around the home, quickly become markers of a toilet area. Puppy picks up the scent of a previous misdemeanour and is drawn back to reoffend…

If your puppy seems slow to catch on, it can be a worry.

Take a moment to step back and reappraise your training methods. There may be a simple explanation as to why things aren’t going so well. And this applies to adult dogs and older dogs as well. The rules for how to house train a dog are similar to their younger counterparts.

Avoid tripping on these seven common housetraining mistakes, with our puppy training tips.

That adorable bundle of trouble is just that…he shows not the slightest inclination of toileting outside. To him, the carpet, bed, and sofa all seem fair game. Oh no! My puppy won’t toilet train.

How old is the puppy?

Under the age of 8 weeks, puppies have small bladders and little control. If you’ve only had the youngster a short time and things aren’t going well, it’s possible he might be younger than you think.

Likewise, just as children develop at different rates, so do puppies. But know it’s fair game for an 8 – 12-week old puppy to struggle with housetraining and don’t expect too much too young.

#2: Lick and Flick Rather than a Deep Clean

The infuriating thing is the puppy deliberately goes to the wrong spot. Instead of going to the potty spot outside, he’s picked a place by the TV and regularly squats there.

What’s happening here is there’s a lingering odour that draws the dog back. There are scent markers in urine and faeces that we can’t smell but the sensitive nose of a dog can. Unless you properly deep clean after each accident, there’s a risk the puppy will sniff out previous misdemeanours and return to them.

Wall to wall carpets? Consider investing in a good carpet steam-cleaner. Otherwise, restrict puppy to a room with a washable floor and used non-bleach based cleaning agents to thoroughly deodorize.

The puppy is such a live-wire that he runs from room to room and is impossible to keep track of. Unfortunately, when you thought toilet training was going swimmingly, you discover a secret stash of poop under the dining room table…

One of the golden rules of puppy toilet training is supervision at all times. Then, when you spot puppy about to squat, you whisk them up and outside onto the toilet spot.

If puppy has the range of the house, this supervision is almost impossible. So change the rules. Restrict the puppy to one or two rooms, but always the room you are in. If necessary, have pup on a collar and lead attached to your wrist. That way a tug on the arm will alert you if he starts to get up to mischief.

And for those times when you can’t physically be present, crate training is ideal. The puppy’s instinct not to soil his den kicks in, so he crosses his legs until he’s let out to play…which provides the ideal opportunity to put him onto the toilet spot.

Sometimes puppy pees in the right place, sometimes he doesn’t. What you’d really like is to focus the pup’s mind on is when the right time and place is to go.

A make or break aspect of how to house train a puppy is timing. When you praise puppy this makes him want to repeat the action. This means actively praising him whilst he’s in the act of toileting.

Praise him a few minutes later and he won’t have a clue what it is that’s being rewarded. A top dog training tip is to mark the exact moment with an enthusiastic “Yes!” or “Good boy”, then add your cue word. For toilet training a dog a good cue word is short and sweet such as “Toilet” or “Potty”. Then give your dog a treat to make the lesson stick. 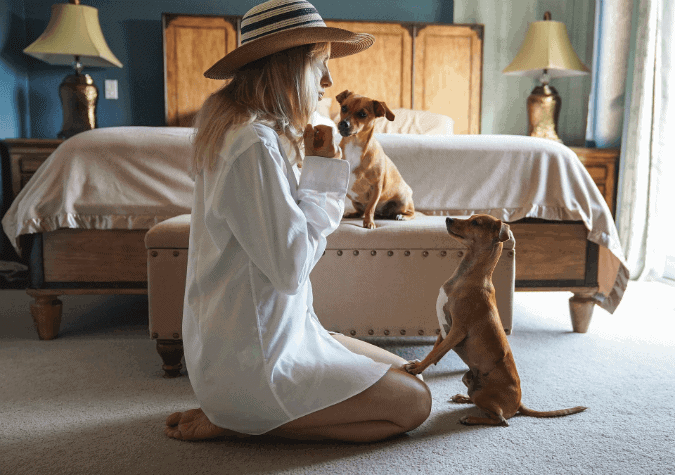 You take the pup outside, but nothing happens. This is frustrating as you take him inside, and he defaces in the wrong place.

Increase the ‘hit rate’ by offering plenty of opportunities when puppy most needs to defecate or urinate. Golden opportunities to visit the correct place are:

In addition, set a timer on your phone, and take the puppy outside every 30 minutes. Also, give the puppy positive reinforcement in the form of lots of praise when the happy event happens.

#6: Play Rather than Pee

You put the puppy outside, but all he does is play. Then when he comes indoors, the first thing he does is squat down. Help! My puppy won’t potty train.

Sadly, puppies rarely potty train themselves. You need to be there to praise the right thing. Simply putting puppy outdoors and leaving him isn’t going to work. He’s easily distracted by falling leaves or earthworms. He’ll forget all about that full bladder…until he comes back indoors.

Stay with the puppy, but don’t distract him. Then be lavish with the praise when he does go.

The pup went to the toilet right there, you shouted and he stopped. But since then he keeps disappearing and you suspect he’s peeing in secret places.

Punish a puppy in the act of peeing, and he learns the wrong lesson. In the pup’s mind, he links the punishment to you, rather than the place. Thus that puppyish mind decides that you have an irrational dislike of his bodily function. This makes him shy about performing in your presence and hinders rather than helps toilet training.

If you do catch the pup in the act, simply clap your hands to interrupt him, then scoop him up to take outside.

They are rare, but some puppies do have anatomical quirks or medical problems that make toilet training difficult.

If your puppy seems unaware they are peeing (such as they wet their bed in their sleep) or is constantly squatting, this needs checking out by your vet. Where possible, collect a urine specimen for the vet to analyze. Then get your four-legger checked by a vet.