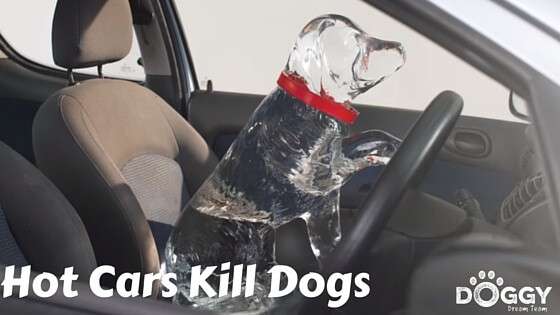 Felt it was right to resurrect this post in time for summer 2017. Good to spread the message every year.

Would you put a baby in the oven?
When people leave dogs in hot cars, this is exactly what they’re doing.

5 reasons why leaving dogs in cars, even on a mildly warm day is a bad idea:

What to do if you see a dog suffering in a locked car
The consequences of a dog dying in YOUR car.

Even on a balmy day when the air temperature is a pleasant 21ºC, it only takes 60 minutes for the temperature inside a car to reach a blood-boiling 46ºC.

Why does this matter?

Because when a dog’s core temperature reaches 41ºC his blood becomes so thick it can’t circulate properly, he suffers organ failure, and dies. In short, even on a mild summer’s day dogs die in hot cars from heat exhaustion.

There’s a reason recipes tell you to pre-heat the oven, and this is because the temperature rises with time. This is just the same with a car because after 60 minutes the temperature inside can be 4.4ºC (or 40ºF) hotter than outside. When you bear in mind that heatstroke in dogs occurs at core body temperatures around 41ºC (normal temperature 39.2ºC) and you begin to glimpse the problem.

“It’s easy to see the danger. You just have to touch the dashboard or seats to know how hot the inside of a car can get.” Mark Spowage. AA Patrol of the Year.

It’s 24ºC outside, jeans and T-shirt weather. On the drive home from the dog park you remember you’ve run out of nappies so you stop off. The superstore doesn’t allow dogs inside so you crank open the car windows, grab the baby, but leave the dog as he’ll fine for ten minutes.

Unfortunately, the baby needed a change and there was only one till open with a huge queue, and the ten-minute errand took half-an-hour. By this time the temperature inside the car has climbed to 42.7ºC

Guess what?
Your dog now has heatstroke.

To understand how easy it is for a dog to suffer heat stroke in a car, here’s a quick quiz.

QUESTION: What’s your best guess for the temperature inside an oven at Gas Mark 1/4 (say, to cook meringues)?

ANSWER: The cook’s amongst you will know the answer is (b) 110ºC, which is also high enough to give a dog heatstroke… and this is GM ¼!

From going on holiday to trips to the park, traveling with a dog in the car is inevitable. Tops tips for keeping your canine cool include:

Remember wearing a fur coat inside a warm car can lead to heat distress, so what are the signs to watch for?

If your dog has heatstroke it’s imperative to act fast in order to cool him down.

If the dog seems drowsy, unsteady on his feet, or isn’t improving within five minutes then seek urgent veterinary attention.

If you want to know why do dogs die in hot cars it’s because heat causes blood to thicken. This makes the circulation sluggish and key organs such as the brain and kidneys quickly become deprived of oxygen. In a worst-case scenario the dog can go into organ failure and die within minutes, which is why you should never leave your dog in a car in warm weather, even for a few minutes.

Remember, all it takes is a car the same temperature as a cool oven to cook meringues and your dog could be dead.

According to the American Veterinary Medical Association (AVMA) hundreds of pets die each year, from being left alone in hot cars. The trouble is, many of these dead dogs belonged to owners who believed that leaving the window open ajar meant their dog would be fine.

They found out the hard way they were wrong.

Likewise heatstroke in dogs doesn’t just happen when the sun shines. What matters is how hot it is outside; It’s the temperature that counts, so even when parked in shade or on an overcast day, a car acts like a greenhouse and it gets hotter and hotter inside.

“48% of people who leave their dog in a car in hot weather believe its OK because they’re parked in the shade of the window is open.” Dogs’ Trust survey

Note: This is advice direct from the police, so is best having a good read of it to understand your position should you ever find a dog in a hot car and have to act. 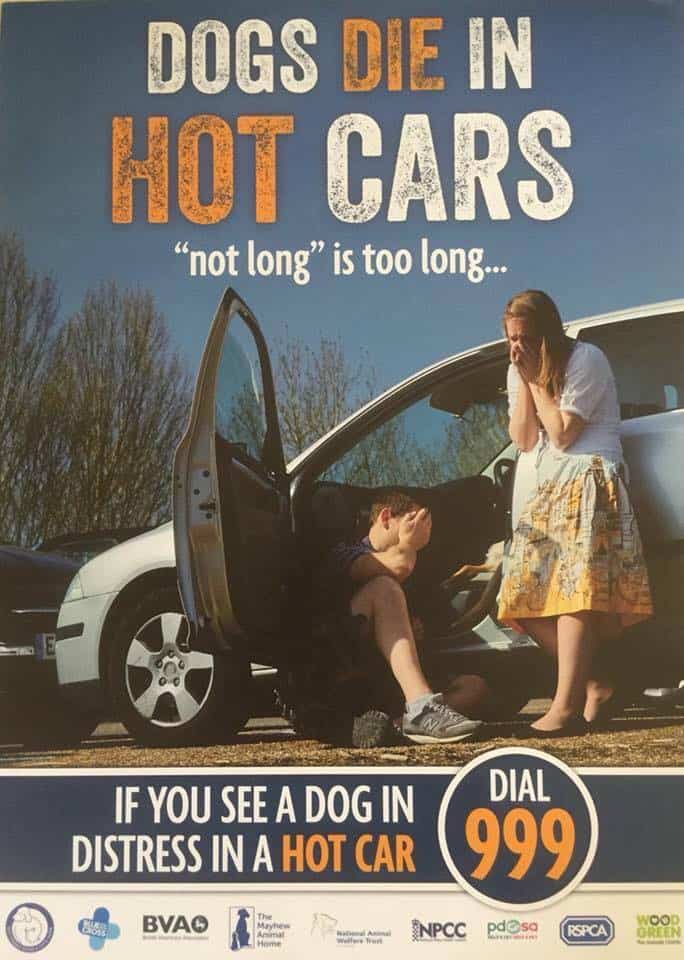 As the weather is set to be getting warmer here’s it’s a timely reminder not to leave the furry ones in the car.
It only takes a couple of minutes for the heat inside a vehicle to become fatal.

This does depend on the level of distress of the dog of course.

It is not advisable to force entry to the vehicle yourself in the first instance. Your first step should be to call the police on 101 or 999 in an emergency.

If the police don’t have time to get there, then you have to decide if you should take action. Make sure you tell the police what you intend to do, why and, where possible, take images/footage of the dog/vehicle before and after causing damage and the names and numbers of any witnesses to the incident.

The law states that you have a lawful excuse to commit damage if:

(this legal reference is slightly modified for clarity but in brief if YOU honestly believe that the dog owner would want the dog saved from dying and would therefore consent to the damage ‘in the circumstances’ then you have a defence in law).

Don’t do this unless certain of your grounds and are prepared to defend your actions at court in the unlikely event any action was taken.

The RSPCA can offer guidance on information on cruelty via their cruelty line at any time on 0300 1234 999. See further advice from the RSPCA on the website in related information.

The consequences of a dog dying in YOUR car

If a dog suffers or dies as a result of being left in a hot car, their owner, or the person for the time being in charge of the dog, can be prosecuted for neglect or cruelty under Animal Welfare Act 2006  and could face jail time, fines and being banned from keeping animals in the future.

What is your experience of dogs in hot cars? Have you had a near miss? Do leave a comment and share your thoughts with the Doggy Dream Team community.