The Behavioural Basics behind Successfully Crate Training a Puppy: A Pup’s Eye View 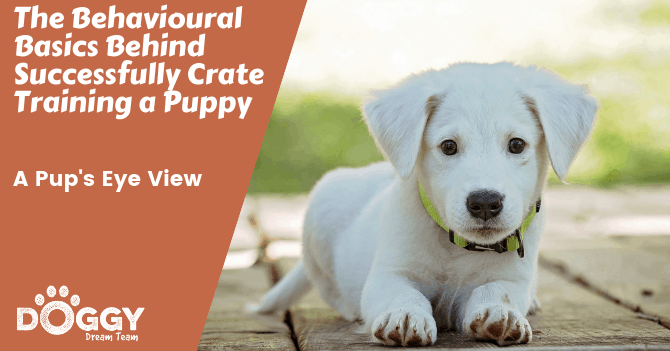 What makes the difference between a dog crate being your best buddy’s happy-place or puppy-prison?

When done well, crate training a puppy is of great benefit to both pet parent and fur-friend.

But approach things the wrong way and a crate becomes a place of punishment.

The answer to training puppies and older dogs alike lies in understanding how a dog thinks. A dog’s needs are simple: To feel safe, secure, and loved. When good things happen in the dog crate, it becomes a cosy nest and a dog’s go-to safe place for time out.

Why Crate Train a New Puppy?

Generations of dogs got by without crate training, so why bother now?

The short answer is that we understand dog psychology much better than in years gone by. Methods of training dogs have undergone a revolution. For example, training puppies has moved on from dominating dogs which makes for cowed canines, to reward-based methods that make for waggy tails.

Crate training puppies is an ideal way to give you a head start on potty training. Indeed, when done correctly it’s a win-win situation because the new puppy has a safe place to rest and get used to being away from their littermates, and you have more control over their toileting.

Think of a dog’s crate as a positive place, as a safe nest that the dog’s own space. What’s not to like about having your own cosy, comfy retreat to go when the world gets too hectic? However, things don’t always work out like this.

The dog has to want to spend time in the crate. Force the dog in or confine them for too long, and yes, inappropriate use of a crate is cruel. But this is easily avoided when you look at life with a dog’s eye view and they learn to associate the crate with nice things such as their favourite toys. This is as simple lacing the crate with treats, so the dog discovers it for the first time and links it to nice things.

From a dog’s perspective, a crate is more than a kennel, it’s their space and no-one else’s. This makes it a safe place the dog can withdraw to when life gets too busy. Much like having a den, this feeds into deep-seated instincts to feel secure if the world gets a little scary.

From a pet parent’s point of view, crate training a puppy means you are 100% certain they are safe when you’re out, especially for longer periods. When crating, here’s no worry about them chewing memory sticks or swallowing soft toys because your fur-friend is curled up and comfy in their crate.

Crate training also gives you a head start on toilet training. Again, the dog’s basic instinct is not to soil their own sleeping area. In turn, this teaches puppy greater bladder control, so that when you do put them out on the toilet spot, they’re more likely to go, giving you a head start in house training.

But dog owners should also consider a crate when introducing a new dog to the household or indeed for an older dog. When done right, this gives them a better sense of security and gives you peace of mind when leaving them for any period of time.

Strictly speaking, crate training isn’t essential and indeed it’s not for everyone or every dog.

However, it does offer an alternative to keeping a young puppy in the kitchen with the floor covered in newspaper. It’s a different way of doing things that can really work well. Dogs are den animals so offering them a crate helps them feel safe and reduces the risk of soiling in the house.

Ultimately, you make the choice.

How to Crate Train a Puppy?

As a child, certain shops excited you more than others. For example, you’d be drawn to the sweet shop or toyshop, but less so about visiting the chemist. This is because sweets and toys shops are exciting, and it creates a positive memory of taste and enjoyment that makes you want more.

The same principle applies to crate training: Make the crate a place puppy wants to explore.

Try these tricks to make a crate irresistible to your puppy:

Once the puppy is regularly popping inside, each time they hop in add a verbal cue such as “Crate” or “Bedtime”. This is the start of your puppies good crate habits.

Now you can move onto the next steps.

Until now, the crate door has always been open. Now it’s time to try shutting the door for short periods. A good time to start this is while your puppy is eating inside the crate. Close the door for a few seconds, praise puppy, then open the door up again.

Gradually increase the length of time the door is closed. Praise the pup in a happy voice when they are quiet inside because now there is both a reward with food as well as positive praise that can make your pups habit stick.

Gradually extend the periods of time the door is closed, but never open the door if puppy whines. Instead, wait for them to be calm, and then reward that good behaviour by opening the door. 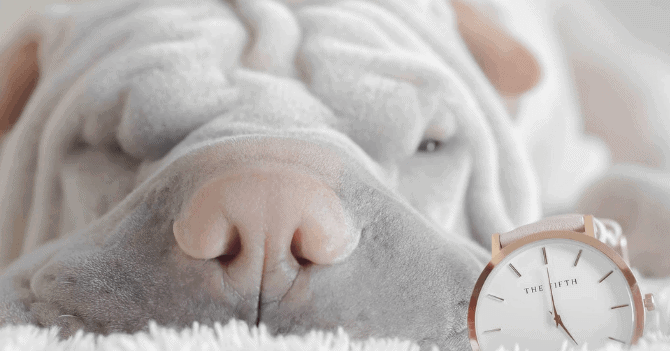 How long can your new puppy last at night time?

The aim is to extend the amount of time puppy is happy inside, without you there.

Understand how a puppy’s mind works and the crate training process becomes easier.

#1: Not Soil the Den: A puppy’s instinct is not to foul their nest. The size of the crate has a direct bearing on this. Too big a crate and puppy may poop in the corner. The trick is to choose a crate that puppy can stand and lie down in comfortably, but not much larger than that.

#2: Attention is a Reward: Imagine puppy is in the crate and they cry. You immediately go over and let the puppy out. The puppy thinking now goes something like this: I cry and Mum lets me out. Great! Crying gets me what I want. See where we heading with this… Golden rule: Don’t respond to whining or barking.

#3: Reward Quiet Behaviour: When a puppy is resting peacefully, there’s a natural tendency to leave them alone. After all, the expression is “Let sleeping dogs lie.” But actually, this logic is flawed. Dog’s love attention and praise is a powerful reward. A dog is more likely to repeat a behaviour if they get praised for it. In other words, do gently praise the pup when they’re resting nicely in the crate…they’ll be more likely to do this again.

#4: Take things slowly: On Day One, do NOT shut the pup in for long periods of time. The dog won’t have built up the positive links and may just feel trapped. Instead, work on having the pup pop in and out to fetch a toy or a treat. Over time you build up to leaving them for a couple of hours and then eventually longer.

#5: Praise the positive: Everyone likes being praised, and dogs are no different. Praise a behaviour and they’ll strain every sinew to repeat it, in order to get more lovely attention. So when you let a puppy out of the crate, make a huge fuss so they know they did good by resting quietly.

In theory, providing a safe place should reassure a young dog that all is well despite their owner not being there. This can be especially useful for anxious dogs, for example, those that are fearful of fireworks. During a noisy display, having a crate to retreat to lets the dog lie-low as if in a cave, until the frightening thing goes away.

However, some puppies must never be confined to a crate. Some young dogs have such severe anxiety that they will hurt themselves trying to escape. These pups will break nails and damage teeth, as they attempt to claw and chew their way free. The best help for these dogs is a therapy with a certified animal behaviourist, to work on their underlying issues.

Remember, confining a frightened dog may make them feel trapped and remove a coping mechanism. If this is a possibility, by all means incorporate a crate as part of your dog training, but leave the door open.

What Size is the Ideal Crate?

For the purpose of potty training, the crate should be comfortable, but not too generously sized. A puppy offered a spare corner may use it as a toilet spot. The ideal size has enough headroom for the dog to stand up and is wide and long enough for them to lie down and stretch their legs, but not much bigger than this. Some wire crates come with a plastic divider, which allows for growth without having to purchase a new crate.

When choosing a crate, think about both the individual dog. For example, a small dog may be just fine in a collapsible crate, which enables you to take their crate with you when visiting friends. Whereas this is unsuitable for a large dog, which could even chew through a plastic crate, making a sturdy wire crate the best option.

Some puppies just don’t settle in a crate. This is often down to us sending out the wrong message. The classic example is the puppy that’s let out when they bark…so they learn to bark louder and longer when they want out. This can be short-circuited early on by ignoring the dog, and only letting them out once quiet (hence, rewarding the good behaviour not the bad).

The right way to use the crate for housebreaking, especially potty training puppies, is to confine them for a short time in the crate when you can’t be there to supervise (and prevent accidents.).

Take the puppy out immediately they wake up or for playtime, but immediately pop them outside for a toilet break. This increase the chances of being in the right place in their new home at the right time, to use the correct toilet spot.

Also, don’t let the dog out of the crate when they are crying. This rewards the whining and teaches them that making a fuss gets them what they want. This system of reward is what modern dog training methods are based on, and owners must be extremely careful to reward the right thing (silence) rather than the wrong (barking).

5 Empathetic (But Effective) Ways to Stop Your Dog Barking

If you have any dog that’s distressed in a crate or refuses to settle, then don’t push the point. The idea is to have a happy pup, not a resentful one. If the crate training plan isn’t right for your four-legger, then don’t press the point…at least you tried.

Instead, understand that successful crate training is all about making use of dog psychology and their natural need for a safe place to call their own. Get crate training right and this makes for waggy tails and happy pups.