7 Medical Explanations of ‘Why Do Dogs Shake?’ 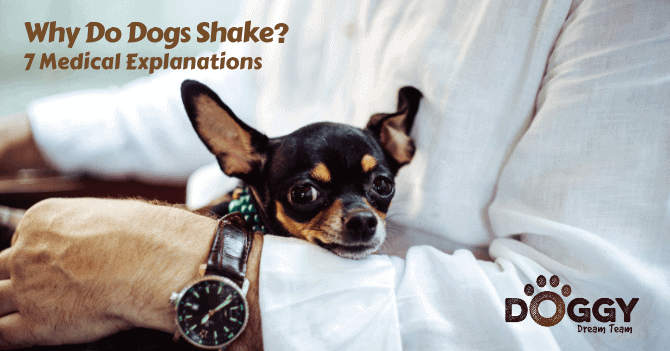 Why do dogs shake?

A dog shivering or shaking could be due to something as simple as feeling cold or anxious. But what about old dog tremors? Or a dog shaking uncontrollably, when resting at home in mild weather?

Always see a vet if you are concerned. But sometimes it’s difficult to know whether to worry or not. With this in mind, let’s look at seven explanations that could explain: “Why is my dog shaking?”

A surprising number of dog breeds are prone to developmental  problems that lead to shakes, tremors, or poor coordination. These problems range from ‘poor wiring’ in the brain or the neurons controlling movement, to muscle storage disease leading to erratic muscular contractions.

A puppy or young dog shaking uncontrollably should be investigated for one of these disorders. Typically, these affect pups as young as six-weeks of age. The signs include (one or more of the following): Standing with a wide-based stance, a pronounced tremor when the dog tries to eat, general shaking or tremors, a peculiar goose-stepping gait.

Examples of these conditions and the breeds they affect are:

OK, this one sounds scary, but its not meant to be. Whilst the words ‘brain’ and ‘disease’ in the same sentence may seem alarming, this isn’t necessarily the case.

Cerebellar inflammation can happen for any number of reasons from a knock on the head to brain tumours. But the list of possibilities is long and includes lead poisoning, nutritional deficiencies, infection, autoimmune problems, and nerve degeneration.

Whether treatment is necessary depends on the impact the dog shaking has on life and if they are unwell in themselves. It’s best to see a vet to be on the safe side.

You’ve probably seen this for yourself: A old dog that has a back leg which trembles and twitches uncontrollably. The dog isn’t cold or anxious, so what’s going on?

An old dog shaking is often down to old age nerve degeneration. A bit like a house in need of electrical rewiring where sparks fly when you flip a light switch, so the nerve wiring can short circuit. As the insulation thins around the nerves, so they can ‘misfire’ and send out messages that trigger muscle tremors and a dog shaking uncontrollably.

There is a recognized medical condition known as ‘White dog shaker syndrome’ which causes some pretty dramatic dog tremors.  This condition even has a fancy scientific name “idiopathic tremors in adult dogs.”

Symptoms of this include shaking in all four legs, which is made worse when the dog exerts themselves. Happily, the dog tremors resolve during sleep.

This condition gets its name because it’s especially common in young dogs from white breeds such as:

But it’s also recognized in other breeds, including

The shakes are down to a mild inflammatory brain condition. It’s thought this is a disease where the immune system gets confused and attacks its own body tissue (in this case the brain). It’s usually mild, but if treatment is needed it usually responds to steroids.

Addison’s disease is known as ‘the great pretender’ because the signs are vague and it mimics many other conditions.

This problem is one of an underproduction of natural steroids, which should help the body cope with stress. Overtime, low levels of steroid cause disturbances in blood electrolyte levels. In turn, these deprive the muscles of what they need to contract in a coordinated way. This results in a dog shaking uncontrollably, along with other signs such as weakness, sickness, diarrhea, or even total collapse.

This condition gets gradually worse, and does require treatment. Always see your vet if you suspect Addison’s disease in your dog.

A nursing mother dog shaking uncontrollably could well have low blood calcium levels. Calcium is required for muscle contraction and co-ordination and when levels are low, this results in severe shaking or tremors.

This is a serious, life-threatening condition. Any mother dog with puppies should see a vet immediately if you notice the dog trembling.

Of course no list of reasons for dog tremors would be complete without pain or anxiety. These are real physiological states that cause a massive release of hormones that result in shaking or trembling.

Key here is to treat the dog’s pain and work on anxiety issues.

Oh, and last but not least – let’s not overlook the obvious. Of course a dog shaking is a way to keep warm. All the muscular contractions that go along with shaking, generate a lot of heat.

So if it’s cold out…don’t overlook the obvious as an explanation to a dog shaking uncontrollably!